What to Do When You’re Creative But Not Commercial

A reader of the Design Range called Jules Richards got in touch with me recently with a really straight up simple question that I (and I’m sure a lot of you) can related to.

“I am creative but not commercial, I am good at production but not business… How can I survive?”

How can I survive? – I’ve been there a few times.

It may strike you as odd given that I’ve written literally hundreds of articles about the business side of the creative industry, but I honestly think I struggle with all the commercial business type stuff.

When it comes to business, I have to stop and think, remind myself, encourage myself, experiment, fail and then start over

Creatively I’m solid, I can do that all day long (and often do), but when it comes to business, I have to stop and think, remind myself, encourage myself, experiment, fail and then start over.

My business is far from a shining beacon of perfection, which I kinda why I started the Design Range in the first place. Every time I learn something new, or find something that works, I write it down in the hopes that it might help you skip some of the bullshit I had to wade through.

Nobody is “bad at business”

You need to get that notion out of your head. That’s like saying “I’m not creative”. What utter nonsense.

You probably get to hear that a lot actually. Almost every time I let someone watch me draw I get comments like “that’s really good, I wish I could do that, but I’m not creative”.

Because they can’t draw?

They’ve written off the whole of the creative sector based on their ability with a pencil? So they can’t code, can’t sing, can’t dance, can’t take a photo, can’t write a story, can’t build something, can’t do a thousand other things just because they can’t draw? It’s nonsense and the exact same is true of business.

What is true is that you probably suck at a very very very small aspect of doing business and you’ve allowed that to balloon to such an extent that it’s created a monumental roadblock for anything remotely business related.

So you suck at promoting yourself, so what? That is one small aspect of being a designer. If you let it, you can use that as an excuse to write off everything, but the truth is that it’s just one little thing. You don’t have to be a rock star with everything, so just put that to one side for a moment and look at the next thing on the list. Chances are you can do the vast majority of tasks that it takes to run a successful creative business and those few things that you can’t do yet – well that’s where the challenge comes in.

They’re not some immovable roadblock, they’re a puzzle to be worked out, and this is how you’ll solve it.

Some things you won’t be good at, and learning that skill is probably the most inefficient way to solve the problem. That being said, it’s important to differentiate between skills you don’t have and stuff you simply don’t know how to do yet.

Writing a contract for example isn’t a skill. That’s just knowledge, once you read how to do it, it’s done. Honestly – read these three articles and you’ll be good to go, and that applies for a whole boat load of things you may not know how to do yet.

A skills is something more like speaking with clients, or dealing with confrontation or effective advertising. Sure, you could learn how to do each of these given enough time, but they’re so much broader and expansive in scope that it’s really not going to be worth the expenditure of time (also, you’ll probably find that as you progress, these skills will improve quite naturally).

So the first step is separating stuff you’re not good at from stuff you just don’t know how to do yet. 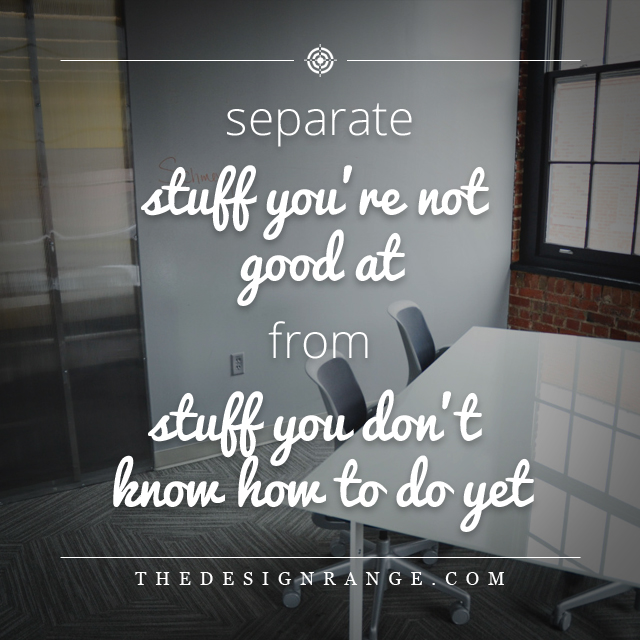 Next up it’s time to think about you. Take a step back and look at yourself objectively. Try to group the stuff you don’t like doing and take a look at the root cause of what connects them. At the same time, look at the stuff you excel at and try to find what connects them too. What you’re looking for is a very concise list of strengths and weaknesses. Once you have this you can really start to work on your plan of attack.

A lot of time we think a task can only be completed in one way, but there’s no reason why you can’t approach it from any number of ways. There’s absolutely no point in struggling with something you’re naturally weak at, instead look at what you’re trying to do and try to think of a way you can use one of your strengths to complete the task instead.

That’s a bit of a broad paragraph I know, so let me try and give you an example.

Say you’re hugely introverted and aren’t good around new people, but you excel at planning and coming up with processes for your work.

So when that initial meeting with the client comes up you’ll naturally get flustered, mumble your words, not be able to think straight and just want to get away as quickly as possible. It’s not the end of the world, but if you’re not getting the proper information on what a client needs from you, then it’s going to effect everything to do with the project going forward.

So play to your strengths. If you’re really not good at initial meetings then just don’t do them. Instead, use those planning skills and come up with a questionnaire that covers everything you’ll need to know and email it to the client to fill out.

You’ve achieved what you needed to and done it in a way that utilises your strengths and totally bypasses your weaknesses. It may not be the “standard” way that other designers work, but at the end of the day, if it makes your business better then it’s absolutely categorically unequivocally the right way for you.

That brings me quite nicely onto my next point. Business systems.

Sounds quite corporate doesn’t it, but all it really means is the way you do stuff.

When you’re starting out as a designer you’re kinda winging those first few contracts. You’re not really sure what you’re doing, and are basically trying to blag your way through it in the most professional way you know how (which often is not very).

What’s important is not to slip into that as your standard way of operating.

I must admit, I do this a bit. I feel like I’m on a roll and the rapport is so good with the client that I just float my way through it. It’s only when I look back do I realise that I forgot to have the client sign a contract or actually haven’t bothered to provide an estimated cost! Let me tell you – backtracking is not professional guys.

So a business system is just a list of steps you take for each thing you have to do.

The whole of that second example is actually a very small part of the first step from the one above. My point is, you can make your systems as detailed or as broad as you like.

Make sure you have set process for how you work, and don’t be afraid to change it! If you come up with a way that works better then iterate and improve your systems until you have an absolutely fool proof method of getting through any project from start to finish.

If by this point you’re still sat thinking that business systems and creative thinking won’t solve the issues you’re having then a simple option is just to offload the onto somebody else.

What’s worse, spending 100% of your time doing what you love and paying somebody else to deal with the bits you don’t like, or forcing yourself to spend far longer than you need to trudging through tasks you hate and aren’t good at simply so you can say you did them? It’s really a no-brainer isn’t it?

Trust me – there are people out there who will be more than happy to take your money in exchange for completing the most mundane tasks imaginable.

I know what you’re thinking though, it’s all money out of your pocket right? For every task you offload to somebody else, that less money coming your way. Well actually that’s not necessarily true.

Say you hate accounts, and want to hire an accountant to handle them for you, but they want £200 to do the job.

No – not quite. You see the variable that you need to consider is how long it’ll take you to get those accounts done. If you can do them in an hour, and you just don’t like doing it, then yeah, the best bet may be to just suck it up and do them yourself. But if these accounts are something you know you’re going to spend the best part of a week slogging your way through then you need to ask yourself some questions.

If you usually earn £350 in a week through design work, and doing these accounts is going to take you a week, then it’s effectively costing you £350 to do these accounts yourself. Do you see where I’m going with this? Even if you pay the accountant the £200 to do the accounts for you, in reality you’re actually £150 better off!

The last thing to consider is this. Why bother?

If you really don’t like the business side of things and would love to just focus on design, then just do that.

That is pretty much exactly what working for an agency is. You turn up, switch on your computer and just design until it’s time to come home. You don’t have to worry about meeting clients, or finding work or submitting invoices.

You just need to do the bit you enjoy, and at the end of the day, if you can say that you spend the majority of your time doing what you enjoy then that’s all what really matters right?