What to do When Unskilled Designers Undercut You

We’ve all had that client email haven’t we? The one that comes a couple of days after we send off our estimate for a contract. After chatting away about concept ideas and what exciting directions we could take? It usually reads a little something like this;

“Hey Awesome Designer Dude – thanks so much for your quote, I really do like your style and you sound like you have a lot of great ideas for my new logo. However, I’ve had a quote from another designer who says that they can do everything you said for $5 which is WAY cheaper than what you quoted. Would you be able to match this offer? I’d love to work with you!”

Yeah I bet you fucking would! Who the hell are they? These designers that charge so little? That skew the market so unjustly? That drive down the price for our work that we need to put food on the table for our families?

Have they invented a time machine and are working in 1910?

Are they students, trying to earn some pocket money? Are they from a country where the average annual salary is $100? Have they invented a time machine and are working in 1910? Do they genuinely believe that a fair price for a logo is $5? Who designs a logo for $5!?

Design Range reader Marisa Jackson recently contacted me with a question not dissimilar to this and I understood what she meant immediately. Marisa wanted to know how she could keep her earnings steady when she had to work three times harder to compete with these unskilled designers that were stealing clients away with their low quotes like thieves in the night.

So I sat and thought about it for a while, and this is what I realised.

Those clients belong to them, absolutely and unequivocally.

Now if you’re sat there thinking that these $5 logo designers are the ones fooling clients into hiring them, luring them in, tricking them somehow, then you could not be more wrong. Those clients belong to them, absolutely and unequivocally. In fact, if by some chance you manage to get one of these clients to hire you at your standard rate, even at some discount rate (which you should never do), then it is YOU who is tricking them. It is YOU who is fooling that client.

Eyebrows furrowed at that last statement? Play it out with me then.

You get the client, you do the job, they pay. Then that same client finds out that there was a designer out there that would have done a logo for $5. How do they react? Either they feel like you cheated them into paying some exorbitant price or that they’ve opted for something that far exceeded what they needed or that they’re just plain stupid for not realising that there were cheaper options.

Does that sound like the client you want? Ever?

You want the client that goes “thanks Christ I found this amazing designer, just look at the steaming heap of shit I could have ended up with if I went down the thrifty route”. I know, I know, it’s all well and good me saying that, but where are all these wonderful clients who will appreciate my skill and professionalism over a cheaper fix?

You don’t even make it onto their radar.

Do you know why? Because you’re so worried about appearing competitive next to Mr $5 logo designer that to them, they’ve just bundled you both into the ‘cheap’ category, and the last thing they want is a cheap designer. Not when the quality of their golden goose project or business idea is at stake. Like I said in my article on the most effective exposure “to a client, their next website, next logo, next photo shoot is an important investment. It’s something worth spending the time to get right”.

Alarm bells will ring, and the upshot of it all is that they just won’t risk hiring you.

I wrote a whole article on this ages ago about why lowering your price wont make you more competitive, but the summary of it is this; even if your work is amazing, if you’re cheap then new clients will immediately be asking why. Alarm bells will ring, and the upshot of it all is that they just won’t risk hiring you. 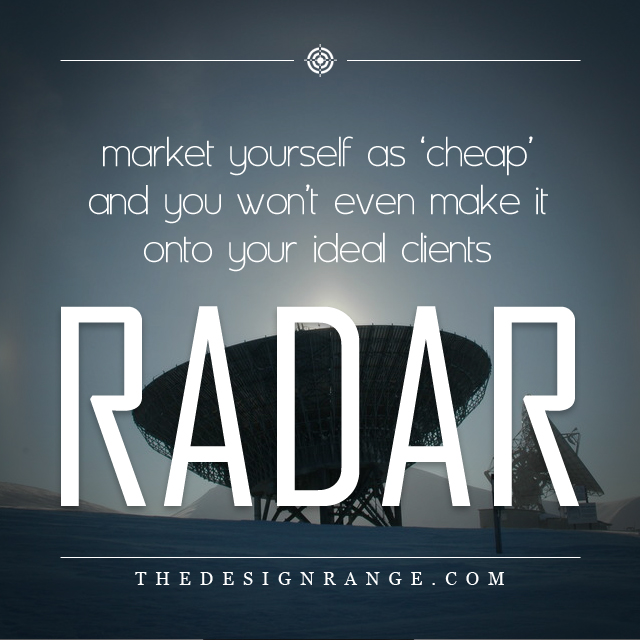 So what’s the plan then?

Jack your prices up to represent what you’re actually worth.

If you’re out on your arse anyway, scrounging around for pennies with Mr $5 logo then what have you got to lose? Give it a shot.

If they hire you, then they will be working with a professional and not some ‘have a go Harry‘.

When the next client contacts you, put together a quote, just as you would normally and then double it, fuck it, triple it. Send out the message that you are not even in the same ball park as these other guys – let the client know unequivocally that if they hire you, then they will be working with a professional and not some ‘have a go Harry‘.

I’m not saying that’s 100% guaranteed to land you that client. Some clients genuinely are looking for that cheaper, non professional option. But one thing I can guarantee is that the client will know you are something wholly different those other cheaper designers. They’ll know you’re a professional. Then the question sits on their side – do they want to hire a professional or not?

If you’re presenting yourself as being the same as those cheaper designers then you’re not giving the client that choice. You’re not even letting them know that there is a choice.

Are you a professional or not?