Opinions on the Microsoft Rebrand

So you may not have heard this yet (especially if you’re one of those cool designers that I keep seeing on trains using the new MacBook Pro Retina) but Microsoft has given itself a brand new logo. I say “given itself”, because that’s exactly what they have done. Using only current Microsoft employees, the new logo has been developed free from any input from outside design agencies, saving Mr Bill Gates a minimum spend of anywhere between $250,00 and $1,000,000. So with that in mind I thought it might be an good idea to take a closer look at perhaps one of most prevalent logos you’re going to be looking at over the next, however many years and see if that $1,000,000 was money well saved.

Let’s take a look back at the old Microsoft logo and see where the inspiration for the new logo has come from, oh… there it is… that wasn’t difficult

First of all let’s take a look back at the old Microsoft logo and see where the inspiration for the new logo has come from, oh… there it is… that wasn’t difficult. Well no, obviously the new windows logo looks a lot like the old one, but can we really criticise that can we? After all the Microsoft logo is perhaps one of the most recognisable logos on the planet, we see it every time we look at a PC, and for the vast majority of us, that’s every single day. Radically altering the logo therefore would probably be a bad idea, after all, the idea of a re-brand isn’t to make customers think that you’re a new company, but rather to look at you in a new way. That said though there are some prevalent designers out there who have a very ‘meh‘ attitude to the new logo. Armin Vit of Brand New said the logo was “fine. There’s nothing offensive about it; there’s nothing exciting about it, and Terry Heckler of Heckler Associates called it “awfully bland”. 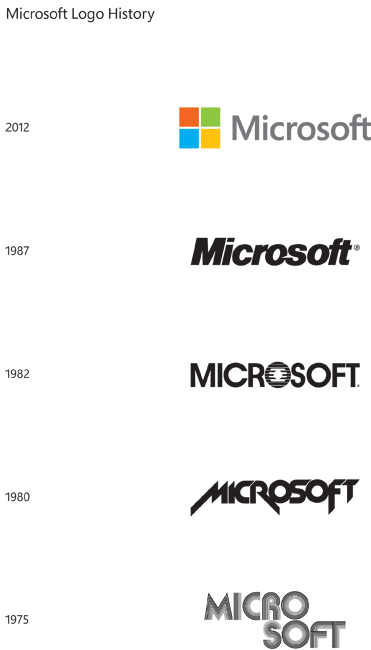 Their new logo doesn’t have any shadows or strokes, any embossing or glows, not even that glass effect that Apple seem to want to use on everything

So why now then? Microsoft (despite having a few change up’s in their early years) have had the same logo now since 1987, that’s 25 years! Well, a lot has changed recently and the new logo is definitely part of Microsoft’s attempt to recognise that. After the recession hit there has been a huge cry for transparency in larger companies form the general public. Many companies have responded to that by trying to be a bit more personal and friendly and in doing so have made their logos much more simple. Microsoft have definitely done that here, completely trashing any notions that they are from the breed of big slick Silicon Valley giants of yesteryear. Their new logo doesn’t have any shadows or strokes, any embossing or glows, not even that glass effect that Apple seem to want to use on everything. It’s just simple squares of colour, what could appear more simple and kinder to a consumer?

Another perhaps more specific reason the re-brand has happened when it has is that Microsoft is on the verge of launching a whole slew of new products. Windows 8 is on it’s way along with a new Microsoft Office, new Windows Phones too and not forgetting the new Windows tablets that are in development. If every there was a chance for a fresh start for Microsoft it’s right now, and let’s face it, with Apple so effectively cornering the “we’re cool” market, they really need it.

The mark of a good logo is that it relates to the product or company in some meaningful way. Now Microsoft have always had this to some extent, with their product ‘Windows’ as the logo looked like a window divided into four sections symbolising the multi-tasking and multi-use nature of the platform. What’s important to remember though is that the Windows logo was not the Microsoft logo, the two are very closely connected but Microsoft was always the company and Windows was always the product. Now the new Microsoft logo does include the windows flag, so what does this say about Microsoft as a company?

Well as I mentioned earlier, Microsoft is no longer just a software developer riding Windows and Office to the bank year on year. They have the new Windows Phones that are looking very promising and the new Windows tablets which are amassing a lot of attention. Add this to a huge range of peripherals and let’s not forget the X-Box, Microsoft really are a hugely multifaceted company, and the separated aspects of the old Windows logo is testament to this; lots of individual products that make up part of the whole. I this this becomes especially obvious when you look at their release video which shows the logo exploding into a massive number of smaller squares but quickly forming up once again to create a whole. Granted that whilst this notion is perhaps a little lost on the static logo, it certainly comes into it’s own when we see it moving and as Microsoft’s Jeff Hansen says, that’s “important in a world of digital motion”.

As I’ve said so many times before, a simple logo is often testament to a good design

So what’s the verdict then? Well after six months of development it certainly wasn’t a rush job, and I think that shows to some extent. It may well look very simple, but when you dig into it, everything has been pretty well worked out, and as I’ve said so many times before, a simple logo is often testament to a good design. Do I think it’s the best it could be? Do I think that a top design firm couldn’t have done better? Possibly not, but that doesn’t really matter, the logo is sound and will no doubt serve Microsoft well in the coming years.

The purpose of this article wasn’t really to assess if the logo was good or not, or even if it was effective (which I personally believe it is by the way), it was more to get you to look at what thought processes go into making a logo that is so seeming simple. Hopefully now you have a better idea of how to approach a re-brand in terms of what questions you need to be asking and what direction you need to be moving in. If you have any questions or you have your own opinions on new look for Microsoft I’d love to hear about them in the comments below.