We all know and love Batman, the Dark Knight that patrols the rooftops of Gotham, bringing terror down on the unjust and protecting the innocent. But don’t you ever wonder how things might have turned out if Bruce Wayne had taken up painting rather than crime fighting to try and overcome the grief from his parents murder? Yeah, me too.

Don’t you ever wonder how things might have turned out if Bruce Wayne had taken up painting rather than crime fighting?

One thing that a lot of people often forget is that Batman is essentially a ninja using shadows as his main ally to complete his tasks. However, these shadows are not just there for cover or to hide in, he uses them to create shapes that strike fear into his enemies. Creating giant bat silhouettes on walls and ceilings. In illustration too we can use shadows to such an effect, and in a lot of ways they can make our lives a lot easier, but first you have to become one with the shadows, you have to make them your ally. 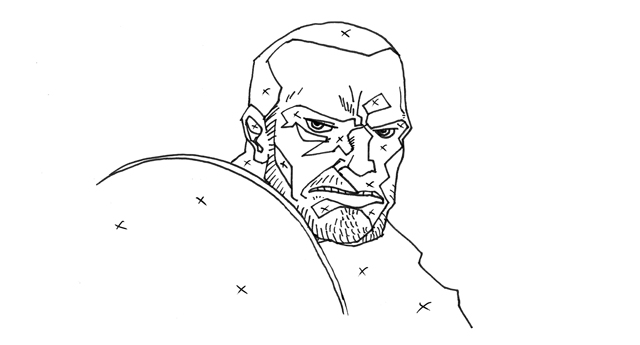 The first thing a shadow requires is light. You need to decide early on in your illustration which direction that light is coming from and think about how it will affect the shadows it casts. You really can’t have shadows being cast in all different directions if you want to make them seem believable. Once you have your light source, you know that every shadow will be cast in the opposite direction, so get your image drawn and start adding in potential areas for shadow. You want to be looking at protruding areas. On a face you’d have the nose and eyebrows. On a building you’d want to look for corners and windowsills. Now that you’ve identified these areas look at their shapes and imagine the shadows they would cast and draw in a rough outline. This can look a little bit odd, and it can be a little difficult to keep track of what’s shadow and what isn’t, so what I do, and what’s considered pretty much the industry standard amongst inkers is to place a simple ‘x’ in the areas that need filling in. 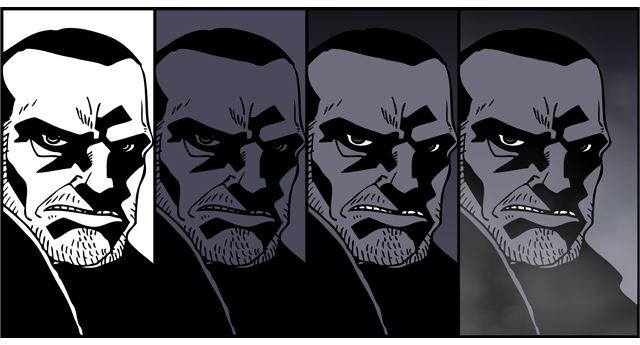 Admittedly this is a very stark way to treat lighting, but let’s face it, this is Batman’s guide to illustration so it makes sense that there isn’t much of a grey area

The reason we use an ‘x’ and don’t just manually fill the areas in is that it takes ages and is really boring. By drawing a simple outline you’ve created a selectable area that once scanned into Photoshop can be very simply and very quickly filled in. It’s at this stage that you get to see if you’re shadows look right or not and make any tweaks you may need. When you’re using solid blacks for shadow you’re creating a very strong light contrast and if you’re scene is already a dark one, it may well be the case that this is the only shading you’ll need to do. Admittedly this is a very stark way to treat lighting, but let’s face it, this is Batman’s guide to illustration so it makes sense that there isn’t much of a grey area.

So where are the benefits to using shadows like the Bat? Well for one, take a look at the examples above, they’re almost 50% solid black and have actually added to the illustration rather than taken away from it. With half of the area buried in shadow it very simply means that you have half the area left to colour and shade which makes you twice as productive. So just like Batman uses shadows to pick off his enemies so that he doesn’t have to deal with them all at once, so too can you take some of the excess colouring out of your illustrations to help you out.

A word of warning here though, it can get very easy to get carried away with shadows and in the past I myself have been guilty of overusing them. It may well have only taken me ten minuets to colour and shade my illustration but there was so much shadow going on that you couldn’t really tell what it was that I had even drawn! You also need to keep an eye on context. Obviously this method of shading works incredibly well when your illustration is suppose to be dark and dingy, but if you’re drawing a sunny field on a cartoon farm, these heavy shadows can look a little out of place. Just remember Batman, he works well in the dark because he can disappear into it, but in the sunlight he just looks a bit silly.

If you’ve found this article useful or have any questions I’d love to hear them. If you’re actually Batman and you’re annoyed with me for giving away your artistic secrets, please let me know in the comments below.