A Trip Out to the London Design Festival

Recently the streets of Manchester have seemed a little more dreary now the rain has made it’s appearance, and I’ve found myself running a little low on inspiration. So on the 14th of September I packed up my dreams and headed down to the shining lights of London town to seek my fortune… for the weekend anyway…

Every year the UK’s capital city becomes home to the London Design Festival, a huge event spread over ten days and 300 venues! Obviously, as the owner of my own design company (and editor of this awesome design website!) I figured I really needed to pop down and see what all the fuss was about! I scooted on down with my fiancée Ann on Friday evening and booked into my room (executive suite standard – or at least on business trips anyway, lol), before heading out for a look-see. 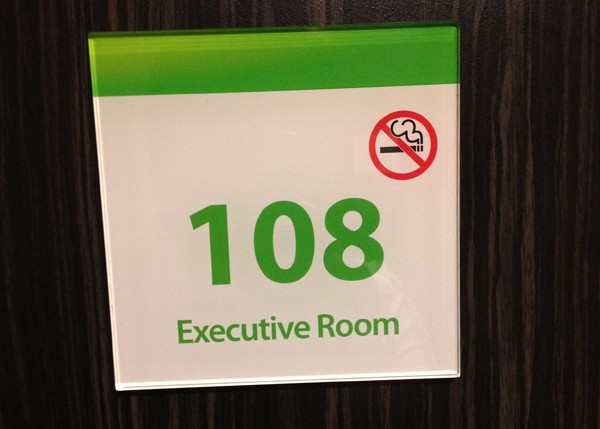 I’d like to say that we took in a show, or whiled away the evening in some fancy bar somewhere, but to be honest we were both pretty bushed from work and we knew it was going to be a pretty hectic weekend, so after a quick meal and a wander round we headed back. On the way home though we did happen to come across a familiar face from the last business trip we took together (that time in Boston) in the form of a Johnny Cupcakes shop! 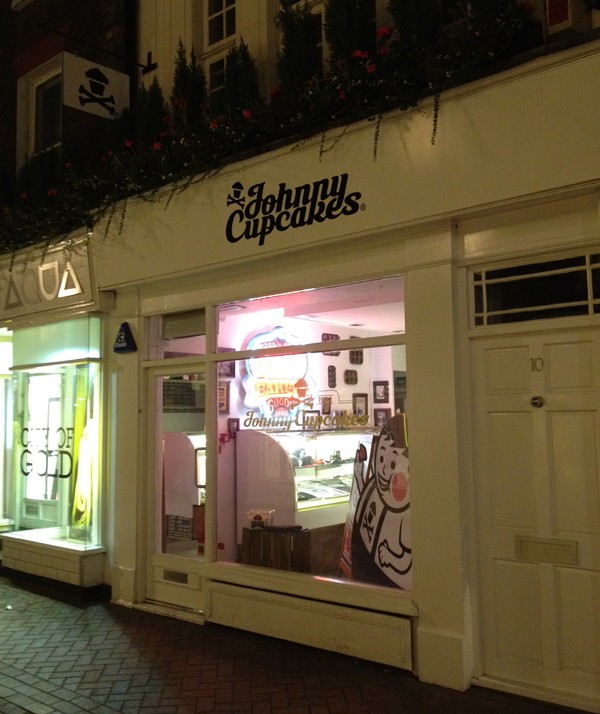 I first came across Johnny Cupcakes a few years ago when I was in Boston launching one of my books at the Comic Con. Ann loved the fact that it was Cupcake themed (as she owns her own cupcake business, My Fair Cupcake), and I was in awe of how clever the branding was. Now just to set you straight here, Johnny Cupcakes sells t-shirts, not cupcakes. The shops however are set out like a bakery with the t-shirts on display in ovens and in chiller cabinets. It’s sounds odd I know, but it’s totally awesome – plus the t-shirts are pretty cool too! Not long after seeing Johnny Cupcakes in Boston I was listening to Jeff Finley’s Threads Not Dead on audio book where he holds Johnny Cupcakes up as the guy who did it right in the indie apparel industry, and I kicked myself for not grabbing a t-shirt when I had the chance! Now here I was again and the shop was shut! To be fair though, it was about 10:30 at night.

Day One – The Old Truman Brewery

I figured I’d try and split my time in London between big high brow design events and the smaller indie scenes. Day one was indie day so we headed down to the Old Truman Brewery in East London’s arts and media quarter where the world famous Renegade Craft Fair was being held. 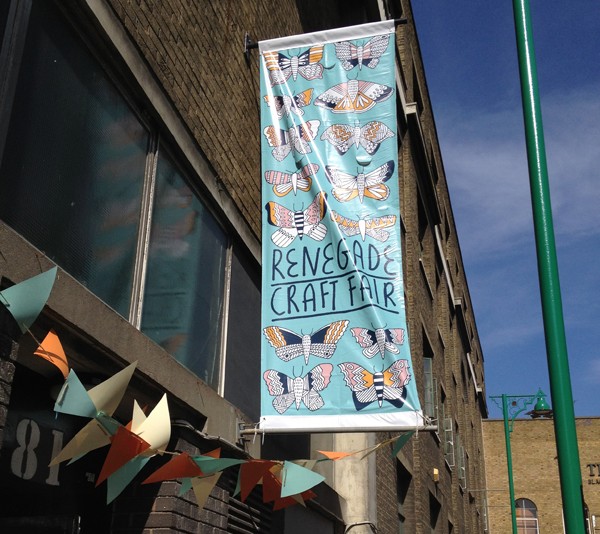 I’ll be honest and tell you that the Renegade Fair was more Ann’s idea than mine (handmade indie crafts was to my mind definitely more the realm of a fair trade cupcake lady than a stone cold designer), but as I wandered around I was actually amazed with how much awesome stuff there was to see that was relevant to me. Sure there was a tonne of knit and funky handmade coasters, but even that was really cool (especially an awesome lady selling flowery cushions with the words FUCK THIS SHIT stitched into them!), I mean just check this guy out : 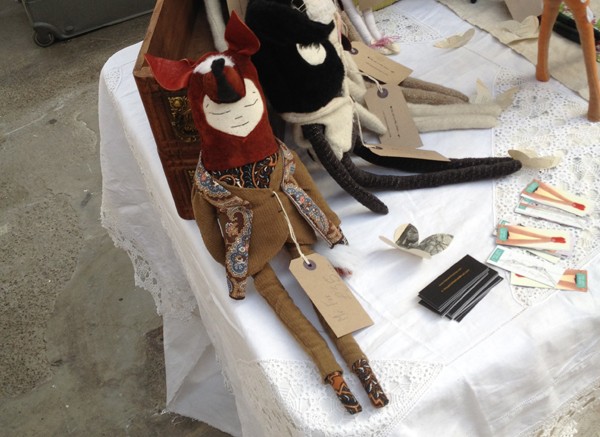 Just sat there chilling out with his deer head hat and cord suit. What a player. I also met Josh and Jules from Love Jules Leather in Canada (who make very very awesome leather ties amongst other things) and Stephanie Tillman who does some killer embroideries. In fact- click that link to Stephanie Tillman, it’s awesome and you owe it to yourself to take a look (I particularly like the one with the two deer “Shoot us? Nah, just keep still. He’ll be cool about this.”). 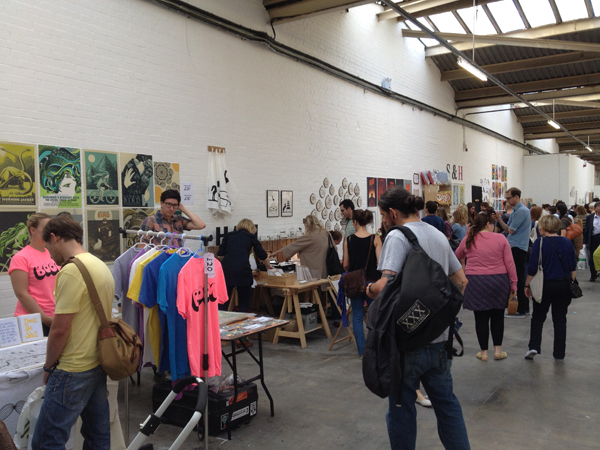 But aside from that there was some really awesome artists selling screen prints of their work such as John Vogl from The Bungaloo and Sean Mort of Threadless fame. It was really great to have a chance to chat with those guys and it really inspired me to try out screen printing for myself at some point. There’s something really satisfying about seeing such clean and contemporary designs painted onto rich card… maybe it’s a designer thing. In any case I totally want to try it out and maybe even get a corner of the Hunting Town office dedicated to handle screen printing? Or maybe I’m getting ahead of myself again? 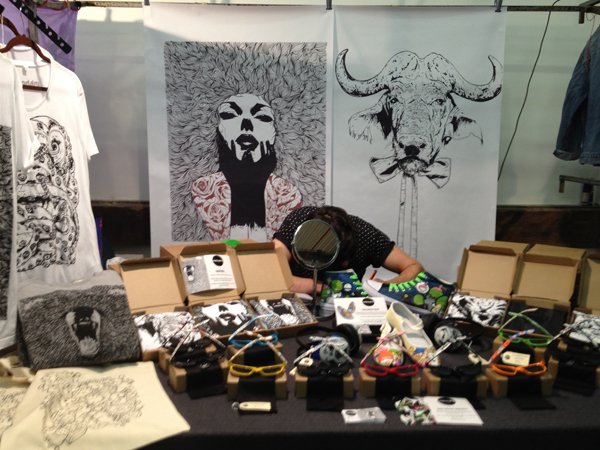 Outside of the Renegade Fair the awesomeness seemed to continue on forever. Every little shop or building with a spare corner had a designer tucked away pealing their wares or some killer street food vendor selling amazing Indian cuisine and (possibly not quite legal) beer. It was way too rammed to drive a car through any of these streets so people were taking to just sitting down in the middle of the road to chill out in the sunshine whilst grabbing a bite to eat and a cold beer. It was very bohemian and a really great atmosphere all round. 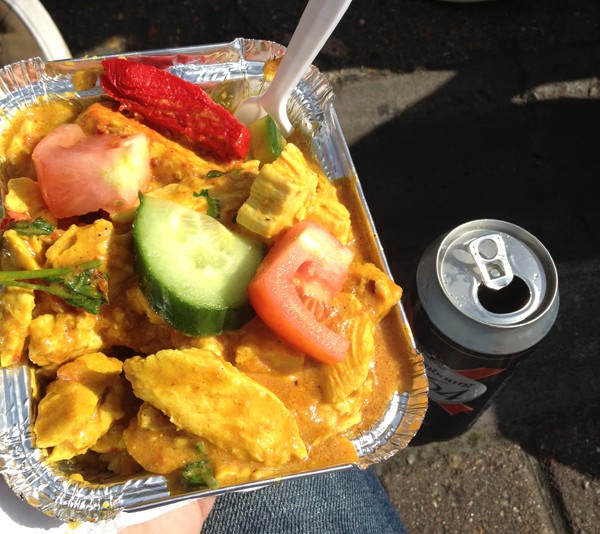 This really wasn’t a tough call at all. I know I said the London Design Festival was over 300 venues, but I just love the V&A so much that I really had to choose this one! They actually had several of the main installations anyway, plus I figured if it was naff I could always check out the amazing collection of Gian Lorenzo Bernini sculptures and Frederic Leighton murals as a fall back plan (man I love the V&A!). 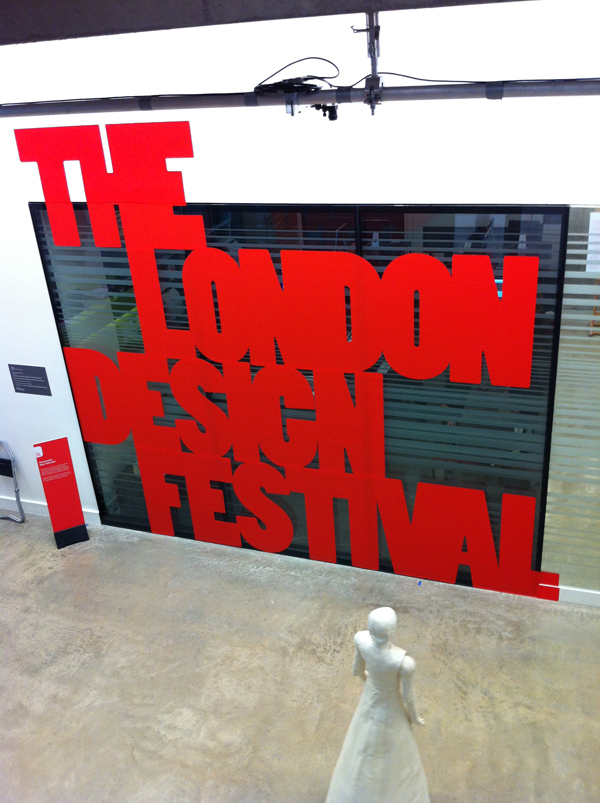 As it turned out, there were some really awesome exhibitions on including the V&A Illustration Awards and the Designing for the Future exhibition. This editorial piece called ‘Mastering Growth‘ by Nick Lowndes I particularly like for it’s simplicity. The idea behind the piece is of a small business trying to survive amongst corporate giants. The illustration captures that idea beautifully and succinctly in a really bold and elegant way. 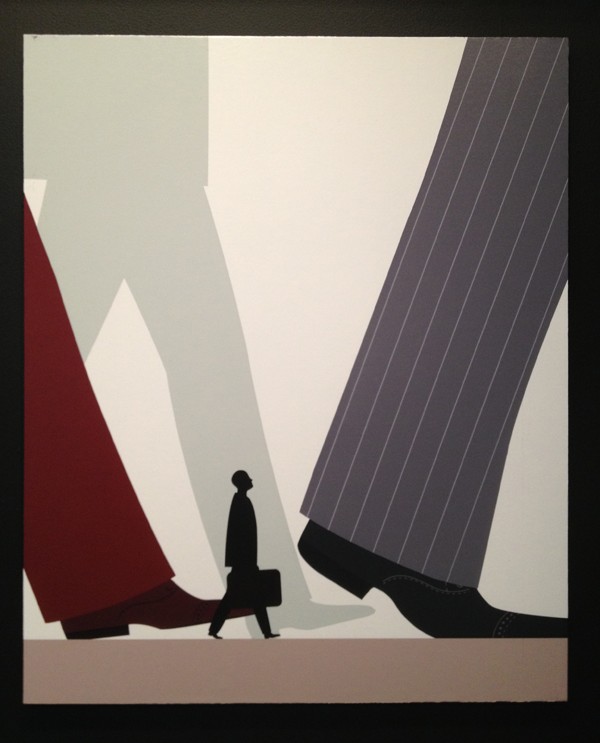 Amongst some of the more major installations were Kitty and the Bulldog (a look at how Lolita fashion from Japan is infulencing British design) and Journey of a Drop (which was unfortunately closed when we visited, but was suppose to be awesome so I’ve mentioned it here).

One of the cool things we did get to play with though was a funky exhibit called Walk The Light. When you enter the V&A through the London Underground you’re instantly hit with blinding spotlight that follows you through to the entrance! Rather than just using a motion sensor to switch on and off the light senses your body heat (which no doubt stands out clear as day amongst to cold Underground tiled walls) and tracks your movements to keep you bathed in light. I was enjoying myself quite a bit until another fellow (who was obviously running hotter than I was) walked through the tunnel and I was instantly abandoned by the light for him. It was quite depressing actually, lol. 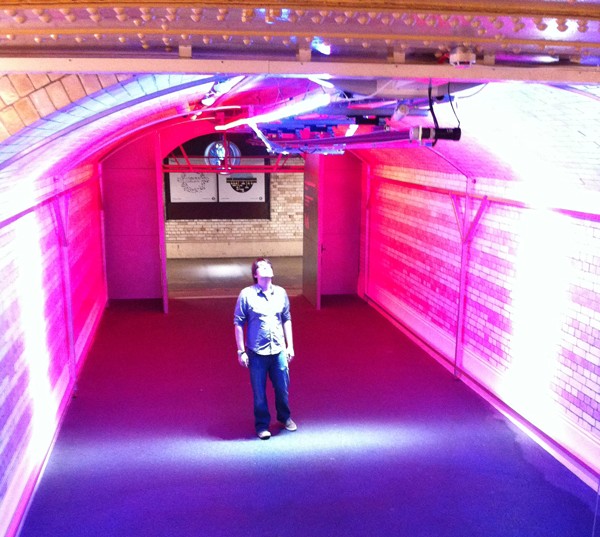 Now there is no doubt an absolute tonne of stuff that I’ve missed out here, but there was just so much amazing stuff that I really couldn’t properly cover it in ten blog posts! I’ve got all this information spread out over my desk just trying to remember everything I can! 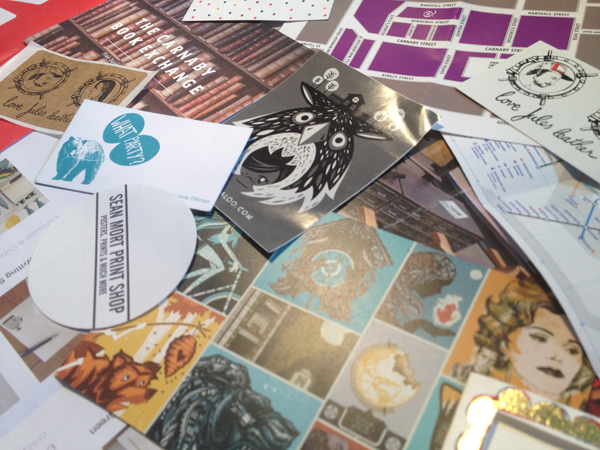 There are a few things that I want to talk more about, like a new website for UK designers that I had the chance to meet with that looks very promising and some of the great ideas and lessons learned from the Designing for the Future exhibition, but those will have to wait for later blog posts.

So with the London Design Festival done (for me at least) I’ve headed back to Manchester with my inspiration meter fully topped off and ready to be put to work. With events like these it’s often the case that we can just rock up, look at the pretty pictures and head home, but this time at least I feel like I’ve learned something, or at least had some fresh ideas and new perspectives on design that I otherwise wouldn’t have had.

If you were lucky enough to attend the London Design Festival then let me know what you saw (and more importantly what you thought of it) in the comments below. Like I said, I didn’t get the chance to see the vast majority of stuff so I’d love to hear about what else was going on! Also- do you think events like this can be inspirational and worthwhile to the design community as a whole, or is it just another way for designers to get exposure for their work and pedal their services? I’d love to hear your thoughts!